April featured the unveiling of IQOS World Revealed by Alex Chinneck in collaboration with Philip Morris International at Milan Design Week 2019, bringing together the tobacco brand’s new creative vision with a monumental work of public sculpture. The new IQOS product is the latest versions of the flagship smoke-free device from PMI, and features as part of their campaign to transform and overhaul their brand and image as tobacco industry giants. Well-known British sculptor Alex Chinneck and his team have completely transformed the building’s facade in just 4 weeks, using the illusion of a zip to evoke possible routes to a newly imagined future. A corner of the building has been re-worked in an extraordinary amount of detail and appears to be peeling back as it is unzipped, revealing a blank wall. Inside the space Alex has unzipped a section of the floor that emits a glowing coloured light. Another zip features on an internal wall in the next room, and a staircase leads visitors up to look over the space from a different perspective. 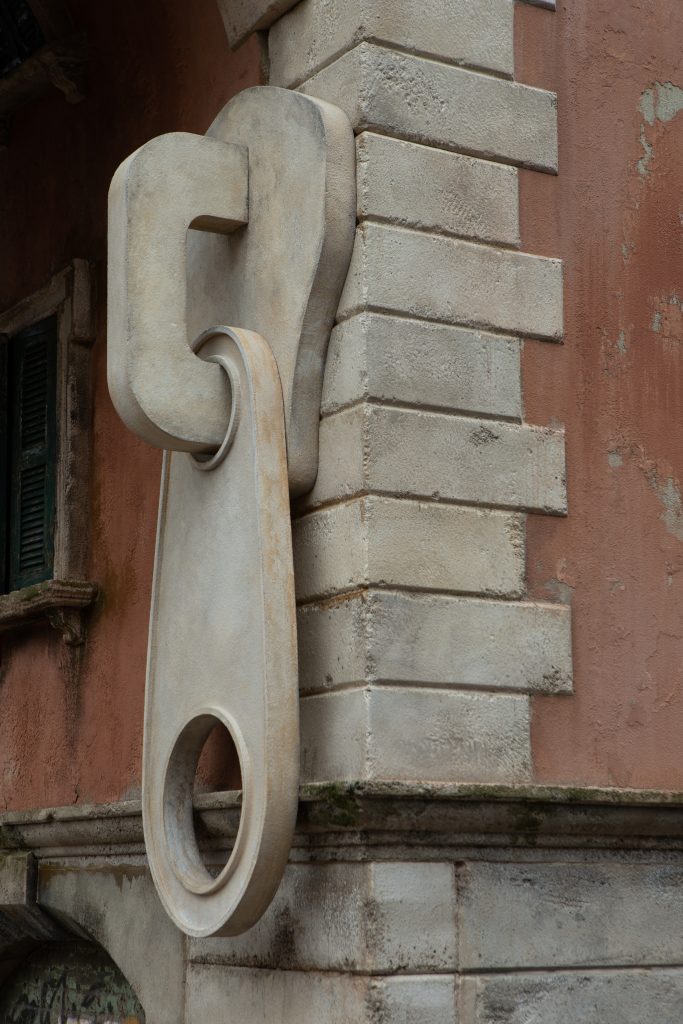 Alex talks through the project – how long do they usually take from start to finish?

It’s always different depending on certain elements. A project like this you can spend years on. But you need deadlines don’t you, and Milan Design Week is all about these international projects which is a great opportunity and platform.

What is it made of?

Your work is site specific – what was the inspiration for this project? Was this at all inspired by the piece you created in Kent?

We had unzipped a building before, and my style is to distort architecture in interesting ways and tune it to the characteristics of its surroundings. This work is pieced together from interesting elements of different buildings we had photographed within five minutes of this location, which heightens their believability. IQOS wanted to channel the notion of opening the future, so the zip is this idea of revealing, opening. And the stone blocks on Milanese architecture worked well as teeth (of the zip). I wanted to get a staircase into the space so that when you’re up there you are surrounded by that light and have a different perspective, so it’s slightly immersive. The whole space is quite immersive, at night particularly. It’s nice for the work to leave the material boundary of the sculpture. 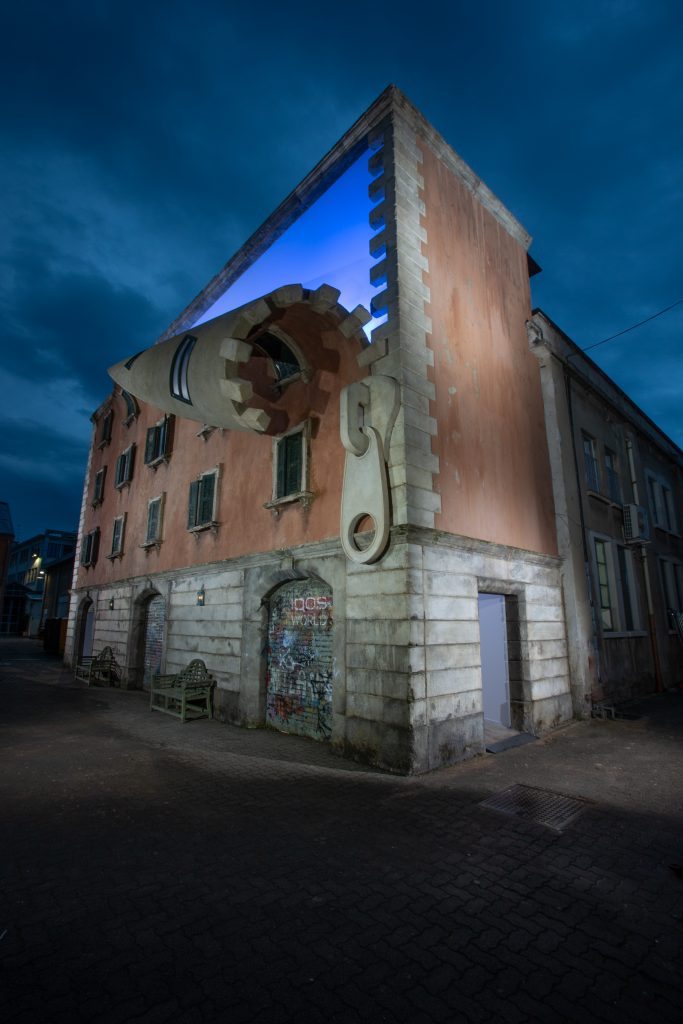 Was there a brief?

IQOS weren’t trying to take that away any creative freedom. It was a fantastic opportunity as the partnership has facilitated an artwork that otherwise wouldn’t exist. Their presence is more about brand and a new product, they weren’t trying to force themselves into my work. It was a genuine dialogue. They’ve been great partners in terms of their commitment.

Is that usually how you create your work, in collaboration?

Certainly, the bigger projects can only exist this way. We often partner with developers and are invited to produce work with them. That’s more about developing a heightened awareness to a location, whereas this was about heightening awareness to a project, but also a philosophy of combining designer technology and future thinking.

You said that “Art, especially public art, is a platform for escapism – and done well it can take you to another place.” Where do you want to transport the visitors of Milan Design Week to?

Surrealism is a playful disorientation of familiarity, and I guess the work plays on that philosophy – just a momentary uplifting escape from the everyday. And there’s something quite optimistic about defying logic and physics. It’s just that, a momentary magic trick. That’s not to suggest that it’s totally superficial and without depth, it is conceptually light, but intentionally so. We keep the concept simple not in a patronising sense but with accessibility in mind. To offer an experience that lots of people can approach. 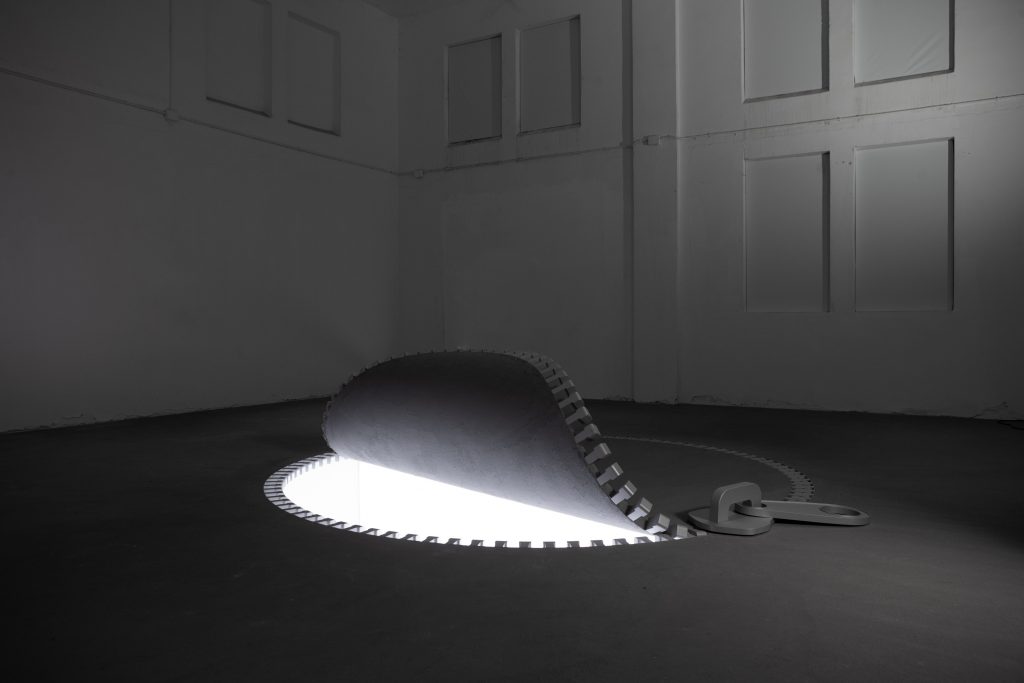 Your work is quite disruptive in the way it challenges space, and PMI seems to be similarly trying to disrupt the way consumers view the tobacco industry.

That’s it, it’s about disruption. The building is fatigued and in a state of disrepair, and we were encouraged to introduce a more futuristic and contemporary element, which we did with the illumination, and sound and the colour. It’s quite exciting to move into more abstract territory. I hope it opens up a new realm of making.

Your projects are growing in scale and ambition, and this is your first project in Italy. Do you have more international work lined up?

We have a project lined up in Mumbai, which is new territory with new people and opportunities. It’s quite an ambitious project so will be a steep learning curve. And we’re working on a project in Germany, which is quite exciting. In the UK we’ve made a lot of projects in the last 5 years and we hope to continue to do so, but we have to expand into an international arena because it offers new collaborators and creative responses. 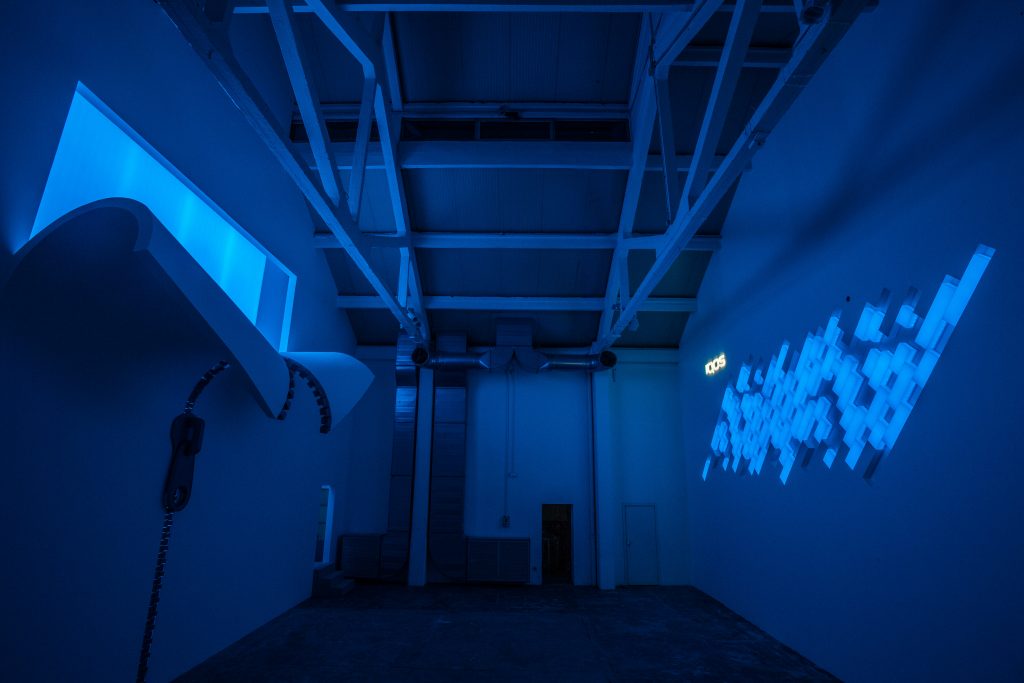 Chinneck’s IQOS world exhibition is expected to be visited by more than 50,000 people and was on view at Spazio Quattrocento on Via Tortona in Milan until April 14, 2019 as part of Milan Design Week.